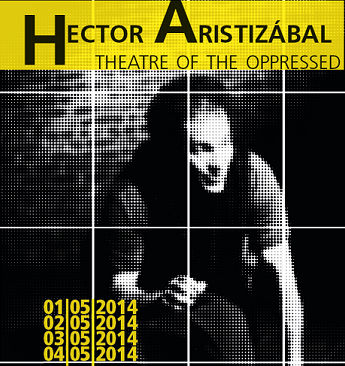 Hector Aristizabál will be with us from the 1st of May until the 4th of May. During this period you can take part in: 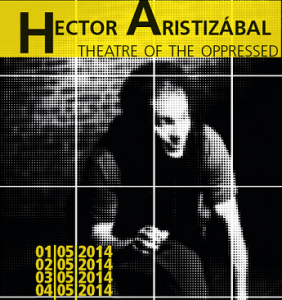 Hector Aristizabál is a Colombian theatre maker, therapist and activist. He is currently based in Los Angeles where he is artistic director of Imaginaction. He is co-author of The Blessing Next to the Wound: A Story of Art, Activism and Transformation.

All activities will be in English. Don't miss the unique opportunity to work with an internationally acclaimed Theatre of the Oppressed practitioner.

In collaboration with / In samenwerking met:

Hector was born and raised in Medellín, Colombia when it was the most dangerous city in the world. One of his brothers was seduced by the power of crack cocaine and another by the promises of revolutionary armed struggle. Hector’s path was different. He worked his way out of poverty to become a theatre artist and pioneering psychologist with a Masters degree from Antioquia University, then survived civil war, arrest and torture at the hands of the US-supported military. In 1989, violence and death threats forced him to leave his homeland. In exile, Hector struggled to overcome his rage and desire for vengeance and to channel these energies instead into constructive social action. 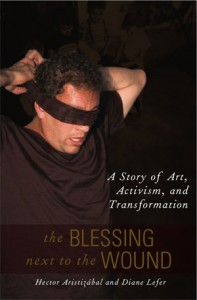 Since arriving in the US, he has won acclaim and awards as an artist and also received a second Masters degree, in Marriage and Family Therapy from Pacific Oaks College, leading him to combine his training in psychology and the arts with lessons gained from life experience in his therapeutic work with torture and trauma survivors, incarcerated youth, immigrant families, and people affected by HIV/AIDS. As an activist, he uses theatrical performance as part of the movement to end torture and to change US policy in Latin America.

He founded ImaginAction to help people tap the transformative power of theatre in programs throughout the US, Latin America, Europe and around the world, as far afield as Afghanistan, India, and Palestine, for community building and reconciliation, strategizing, and individual healing and liberation. Through experiential workshops, theater performances and other creative events, ImaginAction invites participants to explore embodied knowledge, challenge the inevitability of violence, and use their imaginations for a more just and joyous life for all people.

He has served on the core council of the Colombia Peace Project-LA and on the boards of the Program for Torture Victims and of Pedagogy and Theatre of the Oppressed, a global forum for social justice based on the ideas of Paulo Freire and Augusto Boal.

ImaginAction Theater Inc. is a non-profit theatre arts organization based in Los Angeles, California, but our workshops and performances travel the world. Our work has been influenced by Theatre of the Oppressed, Playback Theatre, Theatre of Witness, Psychodrama, traditional storytelling, mask-making, drumming, dance and creative ritual.

LABO vzw lanceert Back to Rural!
Scroll to top

This site uses cookies. By continuing to browse the site, you are agreeing to our use of cookies.

We may request cookies to be set on your device. We use cookies to let us know when you visit our websites, how you interact with us, to enrich your user experience, and to customize your relationship with our website.

Click on the different category headings to find out more. You can also change some of your preferences. Note that blocking some types of cookies may impact your experience on our websites and the services we are able to offer.

These cookies are strictly necessary to provide you with services available through our website and to use some of its features.

Because these cookies are strictly necessary to deliver the website, refuseing them will have impact how our site functions. You always can block or delete cookies by changing your browser settings and force blocking all cookies on this website. But this will always prompt you to accept/refuse cookies when revisiting our site.

We fully respect if you want to refuse cookies but to avoid asking you again and again kindly allow us to store a cookie for that. You are free to opt out any time or opt in for other cookies to get a better experience. If you refuse cookies we will remove all set cookies in our domain.

We provide you with a list of stored cookies on your computer in our domain so you can check what we stored. Due to security reasons we are not able to show or modify cookies from other domains. You can check these in your browser security settings.

We also use different external services like Google Webfonts, Google Maps, and external Video providers. Since these providers may collect personal data like your IP address we allow you to block them here. Please be aware that this might heavily reduce the functionality and appearance of our site. Changes will take effect once you reload the page.